The other night my friend Ali asked me how is it that I’m not complaining about our family’s new puppy.  The question threw me for a minute because I complain about him all the time, just mostly to my family because, I’m ashamed to admit it, I sometimes hate my puppy.  I know.  I just lost half of you- you are probably cursing me out and calling the Humane Society to come and rescue my rescue.  But, please allow me to explain myself…

First and foremost I’m a mom to a kindergartener and a toddler.  Second, I’m the wife of a man who works long hours and travels frequently.  That right there is enough for any sane mom to say no to adding a puppy into the mix but throw in my Type A personality and a senior dog who is still pissed at me for having kids and one would think a puppy would not be living in our home.  But he is, and how did he come to be here?  It’s simple: I was tired of always being the heavy, the practical one, the Debbie Downer if you will.  I field all sorts of ridiculous questions on a daily basis that almost always require me to squash a dream: No, you cannot live with Grammy; No, you cannot have a motorcycle; and no, we will not be getting a baby brother and no we cannot trade your little sister for one either.  And the list goes on and on.

So cute right?  Well, now that he is huge any time I come near him he lunges at me for a cuddle so this is what most of his pictures look like before he knocks me over…

So, when my husband (yes my husband) asked for the millionth time if we could get a puppy, I said yes with only a moment’s pause. He was so surprised by my positive response he immediately set to work picking one out, and within the hour our little rescue was on his way to our home.  What made me finally cave in to this particular request?  Two months in and I’m still not sure.  Maybe it was the fact that Madison was heading off to kindergarten or maybe it was this little lyin’ Momma who only talks of the joys but not the shit, literal shit, that comes with it.  (If you don’t follow her on IG you should.  Her pictures are ridiculously cute.  Just don’t run out and get a puppy until you’ve thought it through;))   At any rate, I’ve got complaints.

I typically only burden my husband with my complaints for two reasons: 1. because it’s his fault and 2. because I don’t want to be the a@#hole who hates dogs.  I don’t hate dogs.  Just mine.  Only kidding.  Not really.  It’s been a real test of patience for me, more so than my kids are.  Maybe because I didn’t expect it to be this much work or maybe because I can’t just throw a diaper on him.  I don’t know.  But it’s A LOT OF WORK.  I’m a busy momma, I’ve got stuff to do from sun up to sun down and then some and to fit a puppy’s needs in there? It’s been rough.  So, when my friend asked me how come I don’t complain?  I realized I’m not alone in disliking aspects of pet ownership.  That it was ok to complain about my dog much like I complain about my kids: they’re messy, they poop in the wrong spots, they need CONSTANT attention.  Unlike my children, the puppy sleeps.  So there’s one thing to be thankful for.

Wyatt came to us as a tiny 6 pound ball of love and even though I requested a small to medium dog, he has exploded into a  50 pound ball of love who still thinks he can cuddle on your lap.  He apparently has no idea this growth spurt has even taken place.  I know this because he is constantly walking into things he thinks he can walk under.  And even though he is much more like Marley and Me and less like Momma’s Gone City, he is beginning to grow on me.  Turns out, I just prefer a dog to a puppy, much like I prefer a kid to a newborn.  Each stage is challenging in its own way, but it doesn’t mean you don’t love them during the difficult times.  Even though he is through the newborn phase, it still isn’t easy as he is basically a toddler and everyone knows what comes with that, but he’s grown on me for sure.  Instead of cursing at him for constantly being underfoot, I see his sweet eyes and remember he just wants to be close to me.  And right now as he uses my foot for a pillow, I know I have a friend for life.  My kids adore him and jump on him like he is the little brother they will never have (sorry, not caving on that one) and he is by far my husband’s favorite child.  As for our crankster bull dog, Lucy?  Let’s just say she’s no more pissed than she already was.

And me?  Well, you just look into those eyes and tell me how you can not love that face? 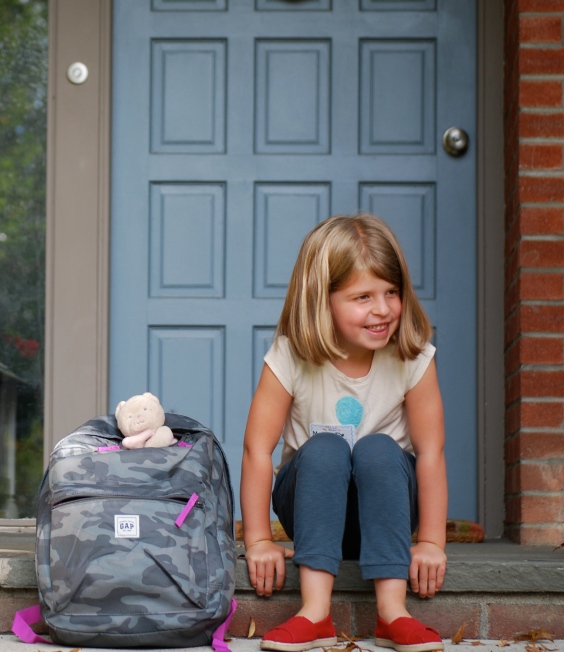 Last week, I dropped my first born off for her first day of kindergarten.  It was exciting and gut-wrenching all at once.  As her mom, I’ve experienced all of her firsts from that first breath to those first steps both resulting in small gains towards her independence. But this one felt different, bigger, scarier.  It wasn’t just a step it was a leap out of the comfort and security of my arms and into the world-on her own-without me.  I was sure she wasn’t ready, and I definitely wasn’t.

We knew this day was coming, she and I, we dreaded it all summer-her vocally, “But, I’ll miss you too much.”  Me secretly, with my brave face on, “We will miss each other just the right amount.” She spent the morning of uncharacteristically clingy asking me to hug her and hold her while nervous excitement exuded from her little body.  I prepared myself for the drop off imagining her hugging my legs, begging me not to make her go, and it would break my hurt to peel her off and push her into the great unknown. But, that is not how it happened.  She climbed out of the car, flashed me one last smile, and marched off toward the door without so much as a glance in my direction.  I was relieved and crushed all at once, a dichotomy of emotions that is motherhood.  As I drove away, the reality of it all hit me and the expected sobs escaped my lips.  But only for a moment because my two year old demanded to know what was wrong from the backseat as my husband, not great with tears, nervously giggled while he attempted to comfort me.  This made Sophie now ask what was so funny which made me laugh/cry or cry/laugh.  The emotions were so jumbled I couldn’t separate them to know which one was prevailing.

She sweetly and bravely left Bear at home to keep me company.

It’s been almost two weeks now, and I’m still getting used to the feeling of it all.  Of letting her go, of being enough for Sophie who misses her big sister, of the carpool line (serious business right there) and of the stillness of the house at nap time.  I often wished for these quiet moments but now that I have them, it feels lonely and strange.  I once read that having a child is like walking around with your heart outside of your body, and it feels so true.  I miss my heart, and I can’t wait to battle that carpool line to pick up my girl and once again have her in the circle of my arms and the safety of home.

In response to another blogger, I wrote my take on the mommy wars.  You can check it out here.  What’s your take on the Mommy Wars? 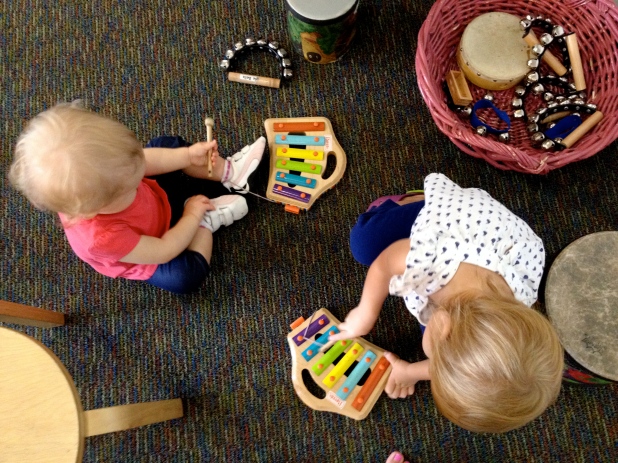 It’s a rainy day, and while I don’t want to be stuck in the house all day with two rambunctious kids, the rain is much appreciated.  If you’re looking for some rainy day family fun, head over to HVP to read about our latest adventure in the Hudson Valley.

When I’m in need of a staycation but the budget doesn’t allow for it, I head over to one of my favorite villages in the Valley.  Check out our day over at Hudson Valley Parent Magazine!

School’s out forever!… or just the next two months which might feel like forever if you have some bored kids hanging around the house. My daughter has been on vacation from preschool for two weeks and the boredom has already begun. But, I’m not worried for two reasons: I think it’s good for her to be bored once in a while. She always manages to find some way to entertain herself eventually making her all that more resourceful, and the Hudson Valley has a lot to offer this summer, many of them free.

If you’re looking for something fun and free to add to that summer bucket list check here for a few that are on ours.

It’s Father’s Day weekend, and it promises to be beautiful, so enjoying the outdoors is a must on our list after all this rain. However, it has to be something the whole family will enjoy, especially dad since it is his day, after all. So, last week I did my homework because there is nothing worse than showing up to enjoy somewhere new and it ends up being a bust for whatever reason: not kid friendly, not adult friendly, too far, too lame…Trust me it has happened more times than I care to recall and is how this blog came to be in the first place. Thankfully, the trip we took last week to one of my childhood favorites: Awosting Falls was a huge success, and I am happy to report that it is now one of my kids’ favorites as well.  You can read about our adventure here.

Last weekend I ran the Spartan at Tuxedo Ridge.  Want to know how I got my non-sportsy self in shape enough to complete this crazy race?  Well, as most great things come to be, it began with a late night and too many drinks….Check out the rest here.

WOOHOO! We made it! The weekend is here, and it’s no ordinary weekend! It’s Memorial Day Weekend and the unofficial beginning to the summer season! Bring on the warm weather, sunshine, and all the outdoor activities you can handle! It’s a long weekend with plenty to do in the Hudson Valley.  Click here for family friendly ways to spend the holiday weekend and to honor the true meaning behind it.

My girl’s got questions.  Lots of them.  I used to be able to answer quite a few and fudge the rest, but now that she is five many of her questions are out of my area of expertise.  There are only so many times a day where you can say “I don’t know” and not begin to feel inadequate.  To make matters worse, after learning about the solar system at school, she was left with more questions than answers especially regarding stars and black holes.  From what I gather, even NASA isn’t sure what a black hole is so I didn’t feel too badly when I once again did not know the answer.  Madison, however, was not satisfied.  So, I did what my mother would have done in this situation: I found a class at our local planetarium and signed us up.  Read all about our experience here.